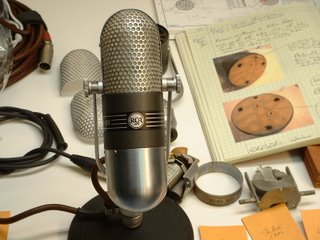 The reference mic was carefully preserved throughout the dissection of the donor mic. This is a mint, perfect, never-been-reribboned late model of the foil style 77DX that I still have here in the lab today.

We also use this mic as one of the comparison mics for new product development. When we do, we always have the settings in the figure 8 pattern and with the reactor switched out.

Posted by Bob Crowley at 2:06 PM No comments:

Check out Larry Killip, composer, producer, musician, singer, and ribbon microphone aficionado Larry is our Patron Saint of Ribbon Microphones, and was a key early member and contributor to our efforts.

Until then.
Posted by Bob Crowley at 9:02 PM No comments:

Proportions and the Rule of Thirds 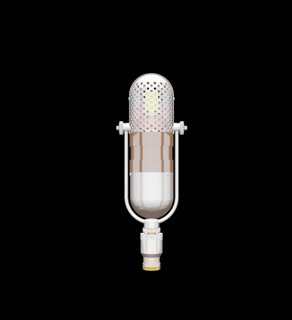 This image is copyrighted
As an art student, I learned about "the rule of thirds" which isn't a rule at all, only a guideline. The "rule" says that proportions in images, colors, and form are often more pleasing when presented in thirds, rather than by halfs or quarters. The 77DX is a little bit long to carry this off, but it is close. If you examine paintings, prints and photographs, you will see that many of the more successful artists follow the rule of thirds.

Audiophiles are already familiar with their own rule of thirds, which corresponds with the so-called odd order harmonic sound, vs the even order harmonic sound. Audio dogma says the second harmonic sounds more pleasant to us. Could these be related phenomena? Maybe they are, possibly for the same unexplained, innate reason that images with thirdlike proportions do.

I'm not convinced about the oft-mentioned tube vs transistor even vs odd harmonic thing, which is commonly accepted. Some real measurements are in order.

Just a thought.
By the way, if you google "rule of thirds" you will get to a lot of places where the idea is presented incorrectly in my opinion. Wikipedia gets it wrong also. It is much more than just a grid or rigid frame, or format. One must consider weight, color, importance of the area (face vs cloud) and other aspects to determine the "thirdness" of a visual scene. Images are massively parallel, music not so much.

Posted by Bob Crowley at 9:34 AM No comments: 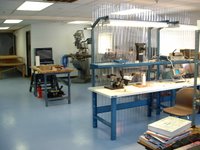 Here's a part of the lab where we did a lot of the preliminary work on the 77DX. This picture is from 2004. Notice that the table top is clutter-free, which is not the case today! I ended up getting about 9 of these blue lab benches with the overhead lights, and they definitely make working on small assemblies such as microphones and transducers easier.
Posted by Bob Crowley at 6:19 PM No comments:

The 77DX in pieces 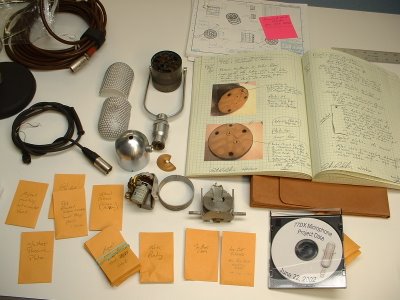 Check out the stack of drawings and the notebook. It took several months to completely dissect the 77DX shown here as bits and pieces, measure and record every part with a photo into the notebook, and then generate engineering drawings in Solidworks. All those small brown envelopes contain the dozens of parts of the 77DX.

First impression: Too complicated.
Posted by Bob Crowley at 12:39 PM No comments:

RCA's 77 line of ribbon microphones comprised Harry F Olson's migration from the large ribbon, figure 8 systems of the 44 series, to a small ribbon, multipatterned device. The 77DX was the higher output version of the 77D which predated it. One can easily look up the published performance specs of the 77 series, but what really sets this line apart from the others was the attempt to produce a true multipattern ribbon microphone using a rear lobe acoustic suppressing system involving a variable acoustic shutter. In addiiton, a selectable shunt reactance across the output could be switched in or out to reduce bass. The complexity of this arrangement, which I think represents a penultimate design for the time, is apparent to anyone who takes a 77 apart.

We took one 77DX completely apart, analyzed the design, even made detailed drawings of all of the components, and did experiments to understand the operation and potential tradeoffs in the 77DX design. For this forensic examination of the 77DX species, we bought two units in as original condition as possible, one to disassemble, and one as a working reference mic. Every screw, bracket, washer and spring was carefully measured, tagged, and drawn into Solidworks. We were fortunate to find a beautiful pair to work with. Before doing anything, we compared the two, recorded the results, and noted any differences.

Somewhere, Massachusetts: I'm starting this microphone related blog entitled "B-Bob's Microphonium Blog". The sporting goods company REI made a mistake some years ago and started calling me "BBob" on all of their mailings. Rather than correct it, I've watched to see if the BBob error has propagated to everyone that REI might provide their mailing list to. Quite a few pieces of REI mail have the BBob on it, but only from them, so far. Maybe they don't share lists. I started using BBob or B-Bob (cannot make up my mind) on any "artistic" product that I am involved in. Several paintings, collages, and even a music piece are attributed to simply "BBob" . We'll see if it sticks or fails to peform like that odd-looking symbol that Prince tried to use.


The term "microphonium" is straight out of the lips of Curly Howard of The Three Stooges. Ham radio op WA1HLR and many other New England hams refer to the mic or microphone as the "microphonium" these days. It is silly, but that's the way it is.

Anyway I'm into microphones in a very deep way, having designed and built all kinds of transducers, sensors and things that detect vibration, and even went so far as to start a company www.soundwaveresearch.com with my old friend from Boston Scientific, Hugh Tripp, to build and sell microphones used for professional recording.

Now that we're making Crowley and Tripp ribbon microphones and have started intense R&D into new materials used for sensors, the time has come to put up some of the ideas and findings that have come from our work in the field. We like to take apart mics, analyze them, critique the design, and learn from the mistakes that were made. Nothing is perfect and everything can be improved, so all mics, even our own, are fair game.

You should know that we run an R&D lab that we share with technology developer AMBIT Corporation, and we patent some of the inventions we make, which means that I cannot tell you about some of what we do here right away.

About patents: The general public misunderstands patents. I'll be putting in comments about patents and some factoids relating to them from time to time. Factoid 1: Patents are granted for a limited period of time so that the inventor gets a head start with his or her idea. Governments grant temporary ownership of the idea in return for disclosure, or teaching that idea, to the public. Good to know.

Ok so today is April 22, 2006, Earth Day. More to follow, starting, perhaps, with the famous and venerable RCA 77DX microphone, an icon of the communications age.

Sometimes there will be articles about electricity, science or technology. Electronics and science are fun, and cool, but some of it can hurt or kill you. I am not going to tell you what will or won't harm you or anyone you know. You need to do that yourself, and you need to use common sense.


What I say about art is fact. My opinion about sound, and what microphones sound like, are actual facts. For instance, if I write that a certain singer sounds like razor blades on sandpaper using a certain microphone, you can count on the fact that I do indeed think that. Otherwise, take this blog with a grain of salt. We may have specs on it. None will be earth shattering and nobody will depend on them for their life or livelihood, since they are all about sound and music, which is art, or is supposed to be. You decide.


Otherwise you are free to enjoy this blog. I may link to it from other places, just for fun. Nobody told me to write this blog, and it may get pretty long because I like to use a computer and type, so don't read it too much. Spend some time doing other things.  I will take many of the pictures in this blog. If I happen to use your picture and you object, please tell me and I will take it down. That probably will never happen since I don't use other people's pictures unless it is of a product or something they want to go around the web, for advertising or promotion.  Those are fair game. It's how the internet works today. If you see a picture here that you like, don't take it and use it on your site or ad, or your ebay listing, without my permission. This blog and its writing are copyright, all rights reserved, and owned only by me, even though it is associated with one or more companies. It is a personal blog, with my personal musings, so they could be actual, but since I am an artist, some of it could be made up, artfully or not.

Where has Bob gone?